BABEL visningsrom for kunst welcomes you to the exhibition Carriers of Meaning by Nanna K. Hougaard.

With the exhibition Carriers of Meaning, Nanna K. Hougaard examines how meaning and knowledge are produced, shared and reproduced across nature, culture, technology, science and economic systems.

The exhibition presents conceptual, installatory works that unite the digital and the sensorial: a generative video installation, a text work based on a search engine’s image algorithm, pheromone perfumed sculptures and a recreation of a scientific experiment from 1886.

The works are a result of a year of research, in which Hougaard has been in dialogue with and received assistance from various experts, including biologists, programmers, an engineer, an imam and a sensory scientist.

Nanna K. Hougaard (b. 1988, Denmark) graduated with a MFA from Trondheim Academy of Fine Art in 2019 and was awarded a studio for graduates at Lademoen Kunstnerverksteder with a subsequent exhibition at BABEL. She often works interdisciplinary, attempting to embody the connections between the natural and the cultural, simultaneously as the works draws attention to the ways in which we produce knowledge. Hougaard has a BA in Aesthetics & Culture and Art & Technology (AU / AAU 2015) and is the founder of Underfladen, a platform for interdisciplinary events across art, music and lectures. 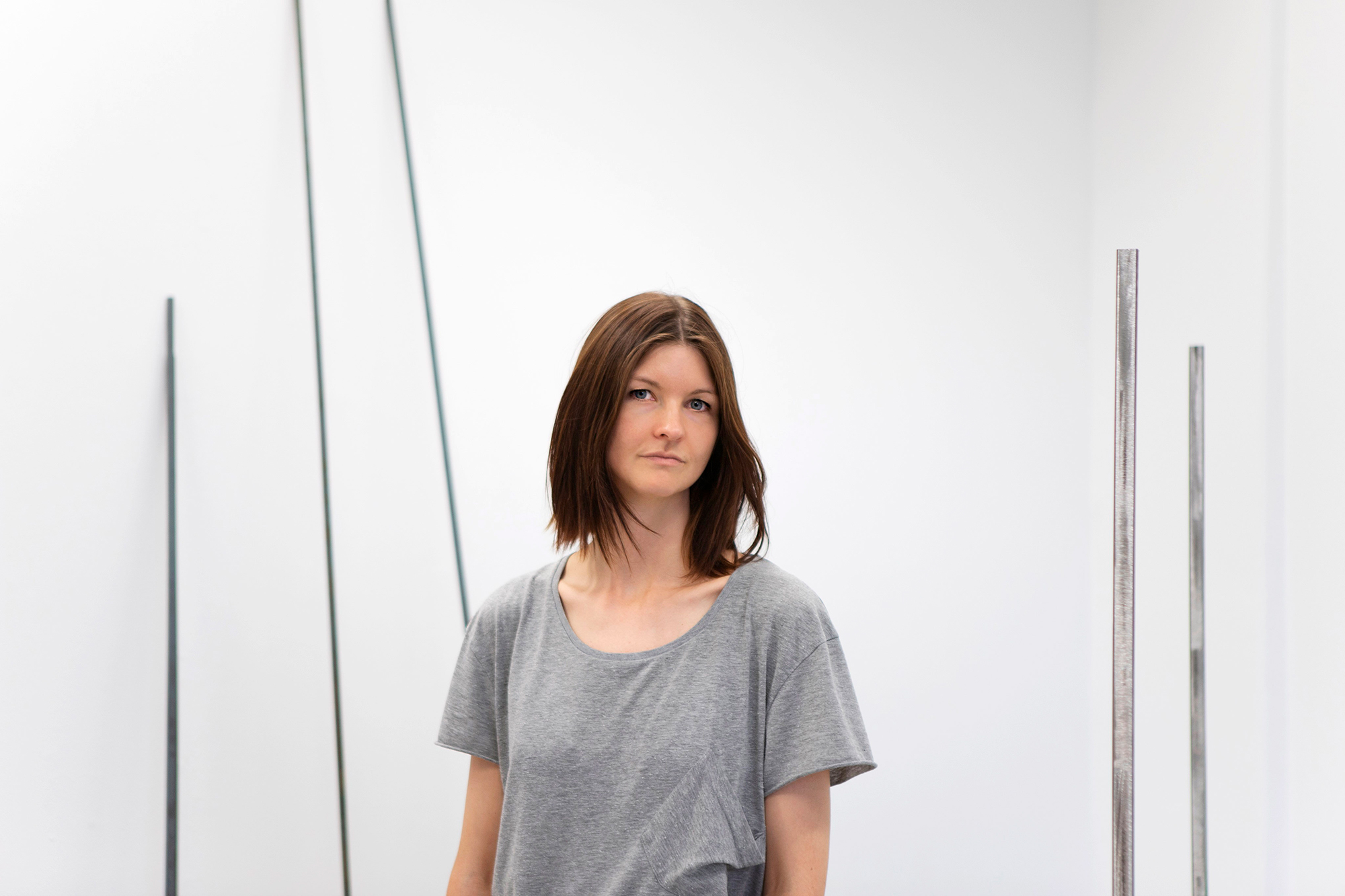 “Although it wasn’t my intention, the whole capital system, and how it is affecting our production of knowledge, was revealing itself through my works.”

Carriers of Meaning by Nanna K. Hougaard presents fragments of research and juxtaposing notions of fullness and emptiness, individual and collective, function and absurdity, meaning and information. Video fragments on multiple screens, pheromone perfumed columns, search engine associations, and a scientific experiment: digital and sensorial transmissions and receptions of fragments as information of the everyday waiting to be imbued with meaning, to be extracted, brought to life.

With a BFA in Aesthetics & Culture and Art & Technology from Aarhus and Aalborg University in Denmark and an MFA from Kunstakademiet i Trondheim in Norway, Hougaard’s multidisciplinary interests echo her approach to her artistic work. As a drummer in the band YDMYG, an emerging curator, an artist, and a participant in conferences about art and science, Hougaard creates a continuous intuitive interpretation from fragments: bumpy, complex, and posing more questions than providing answers.

Nanna K. Hougaard searches for the spark, the fundamental element of how we navigate and connect to each other, to the organic and inorganic alike. “It can be an element I am not yet aware of, something unexpected,” she explains. Hougaard uses a specific approach to discernment that doesn’t bother itself with the noble notions of ultimate truth buoyed by the prestige of reference systems. She instead uses the experience, wisdom, and knowledge inherent in expertise – the expertise of professionals from a wide range of fields, interests, and research – led through a series of questions that beget, well, more questions. This is a process of looking for possible suggestions from those who may know better, those whose time is dedicated to a deeper understanding of a select subject. Hougaard’s process can topically be read as participating in established modes of knowledge hierarchy but it feels much more sincere, holding onto an openness and looking for answers to the micro and macro alike, to the moment, to eternity, to the fullness in the void or perhaps vice versa.

Hougaard uses the lens as a way of seeing, following trajectories of intuition in sharp contrast to analyses of details through multiple perspectives. “[My practice] is research-based but at the same time very much affected by coincidences and mistakes,” she says. Hougaard explores interests across levels through a dynamic process of comparison: the empty spaces of seemingly solid material composition, distance and intimacy within the artist’s role, facets of communication that combine into organic structures in flux. She weaves a narrative of movements in infinite connection; how infrastructural decisions are informed by the small and seemingly disparate actions of the individual within the collective. She states, “What is important is the way we practice meaning. The way we share our individual stories changes the world. We create a new story together.”

At BABEL, the exhibition is a glimpse of how knowledge and understanding are constructed and read through the digital as well as the sensorial. “In the process [of developing the exhibition], something else occurred that put it in another direction that I had thought, but which is a present element of what I am trying to examine… This is my practice, the way the world transforms somehow in these interconnected systems.” The combination of digital screens, scents, and recreations spatially interspersed throughout BABEL constructs specific situations that somehow transform or rather transmute into one another, creating moments of contrast and liaison. But these contrasts are not meant to invalidate the knowledge that forms through their comparison. Each moment adds and changes to what we already know and new possibilities emerge from it. They inform one another over time. This seems to be the crux of the matter: our human ability to construct abstract possibilities of relation as individuals firmly situated within the collective. And this collective also holds its own knowledge, changing as we change, together and alone at the same time, and over time. It expands its orbits of relation to include everything and nothing, shifting according to need, desire, and necessity. This is growth. She states, “I guess I am simultaneously following and breaking down rules. So it becomes a continuous shift between rules and intuition, following a rule until it fails and then following the path of that failure.“

Hougaard’s practice is laden with questions, each opening up to a set of others. How can art fill in the gaps between the sciences? She states, “Making art gives me the freedom to connect the dots, somehow. Which I couldn’t have in academia.” To know a little bit from everywhere is a way to express it and to accept and embrace this forms the central position in her role as artist. “Maybe my strength is to intuitively bring together fragments,” she adds. There is a certain responsibility when dealing with the scientific, an assumption of rigorous trial and observation to ensure an accurate expression of scientific theories. But, she says, “I am an artist and my work is not a scientific text.” In this way, her role can be seen as approximating that of an artist-curator, with an approach of care and curiosity. Hougaard takes care of intersecting narratives within the macro and micro worlds, weaving between fragments of meaning and information. They are collected, re-presented and interpreted as part of her artistic work through technology and aesthetics, and emerge in cultural settings as primarily monochromatic and minimalist installations. Fragments of images, disembodied perspectives of the multitude focus on highly detailed lines of flight. Hougaard delves deeply into the symbolic: the sign, the signifier, the signified, icon, and index, using categorization as a process of practical distinction, boundaries of necessity that help us navigate our world in efficient ways. She deconstructs these in both her interests and visualizations, using technology to question intimacy and distance and as screens for legitimacy and tacit understanding. “In order to act in the world, we need to distinguish: this is the cup, and this is the coffee. In reality, it is much more linked,” she says.

The exhibition Carriers of Meaning breaks down the different represented disciplines and creates new stories. It also creates distance from the messy complexity of subjectivity while framing narrative. It is a tool, here also used as categorization for efficient transmission. But its content disrupts easy understanding, combining multiple voices, information, and meaning onto one platform. Screens present fragments of visual information juxtaposing notions of fullness and emptiness, individual and collective, function and absurdity, meaning and information. A door closing, someone fishing, a ship waiting for researchers to come: video fragments play as information of the everyday waiting to be imbued with meaning by visitors. Adjacent, a collection of composite texts explores the image and text relations from the word nothingness typed into Google and followed through the associations of the algorithm. Perfumed columns exude supposedly gendered pheromones somewhere between science and fiction. Truth and speculation carry equal weight precisely as carriers of meaning. In the black box, an experiment from 1886 transmits and receives radio waves. Hougaard states, “It started as an intuitive idea of an electrical signal. My process and conversations with an engineer led to a recreation of this experiment that completely changed how the world connects.” It is resonance across time. A spark in the dark. 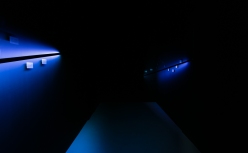 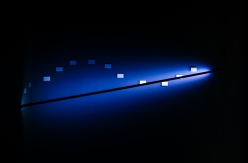