How is social distancing affecting us as humans?

“Quantum entanglement” is the physical phenomenon that occurs when a pair or group of particles can be described as a unit that share the same condition, even when the particles are separated by a large distance. Einstein referred to this phenomenon as “spooky action at a distance”.
In times of isolation, Quantum Entanglement explores how we can create unity, connectedness, and interaction, despite the physical distance between us. In their own isolated world, with an increasing sense of anxiety and loneliness, two dancers and a musician seek outwards, longing for connection.

Quantum Entanglement takes place at Babel visningsrom for kunst. The audience views the performance from outside.

Co-creating performers:
Björn Guo
Musician from Sweden living in Trondheim since 2015. He is educated as a music teacher in violin / viola / electric guitar at Ingesund University College of Music (teachers Prof. Magnus Ericsson and Ane Gustavsson) and studied at NTNU (Ole Wuttudal, Prof. Marianne Thorsen). Guo works freelance as a teacher and musician in the city and regularly plays for Trondheimsolistene. Alongside the classical music, Björn is part of the jazz octet “Sondre Ferstad Ensemble” and in the pop band “Frede Gabriel”. He developed his interest in soundscaping during his studies at NTNU.

Gunhild Løhre
Dance artist based in Trondheim, graduated with a BA honors in performing dance from LIPA (Liverpool). After completing her studies, Løhre danced with the modern dance company Compagnia Fransesca Selva in Siena, Italy in 2015. She now works freelance as a dance artist and choreographer based in Trondheim. Current projects are as choreographer for “Yggdrasil” in addition to her own project, Solidarnosc/Solidaritet. Løhre’s recent engagements include “Elastic Bonding” at the Multiplié dance festival, and the self-produced performance “My Reality”.

Anna Thu Schmidt
Trondheim based dance artist who focuses on improvisation, interdisciplinary projects and integrated dance. Anna holds a B.A. in Dance in Education (ArtEZ Institute of the Arts (Arnhem/Netherlands) and M.A. in Dance Studies  (NTNU). Her interest in the relation between dance and other art forms led to international collaborations and research on the intertwinement of dance and installation art. She is part of the integrated dance company Danselaboratoriet, organizes ImproJAM/ ImproLAB and teaches contemporary dance and Hatha yoga in Trondheim. 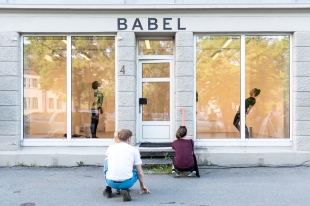